I previously discussed the firing of racist Iowa Department of Criminal Investigation Crime Lab analyst Amy Pollpeter. On August 19, 2016 I received an unsolicited advertising letter from her, offering her services as an expert witness in connection with her new company Forensic DNA Consulting Resources. For the reasons discussed below, I certainly will not purchase her services and cannot imagine how any attorney in their right mind would want to do so either.

Amy Pollpeter was employed by Iowa’s Department of Criminal investigation as a crime lab analyst for years. She then posted to facebook a variety of incredibly racist statements, a screen shot of which are shown below. Highlights (or perhaps “lowlights” would be a better term) include the following:

“But BECAUSE OF BLACKS – I now do notice the color of skin – and frankly, I no longer feel safe around them.”  – Amy Pollpeter

“So if I’m on a sidewalk and you are black, I will now move to the other side of the street and will be watching for whether you have a gun.” – Amy Pollpeter”

“The hatred that blacks are experiencing – they have brought on themselves by their actions.” – Amy Pollpeter 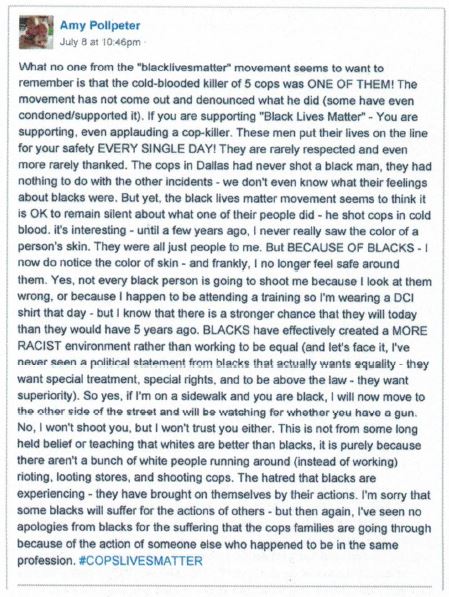 To their credit, Iowa DCI quickly moved to terminate Amy Pollpeter, and is going to recheck her work in hundreds of cases to ensure that her racism didn’t result in inaccurate evidence sending innocent people to prison.  That rechecking will, of course, cost the taxpayers in Iowa a hefty sum of money, but it is the right thing to do as the integrity of our justice system is of the highest importance.

The letter from Amy Pollpeter

As mentioned above, I received an unsolicited letter from Amy Pollpeter, advertising her services through her newly-created company, called “Forensic DNA Resources.”  A copy of that letter can be seen here.

My response to Amy Pollpeter

My response to Amy Pollpeter’s letter in which she solicits work as an expert witness was as follows:

I received your letter in which you discuss your qualifications as a forensic expert and your decade of experience.  As an attorney who has represented many clients in criminal and civil cases in the states of Iowa and Illinois, I have worked with many experts over the years.  Those experts have ranged from medical professionals, to firearms and ballistics experts, to those whose focus is similar to yours. I have lost track of the number of cases in which I have recommended that a client also retain such an expert for either analysis of the case, testimony in court, or both purposes.  I have found such experts to be well worth their fees, as working closely with such experts has allowed me to achieve excellent outcomes for my clients in the most difficult of cases.  Whether it is a felony case in which my client may be facing decades in prison, or a highly contested divorce case in which the well being of my client’s children are at issue, I take the case seriously and will seek out the proper expert for my client.

However, it is clear that neither I nor my associate attorneys could possibly employ your services in connection with any cases for clients of our firm.  That is because your racist tirade that led to your termination proves you are grossly unqualified to serve as an expert witness or consultant in any matter.  Your racism clearly clouds your judgment and calls into question your ability to reach conclusions based upon science and logic, rather than your own biases.  The fact that you omit any mention of the circumstances that led you to no longer work at DCI from your website or advertising letter tells me that you know this.  A situation in which you would reach conclusions and opine on them when a person’s life is on the line is the sort of thing that I (and really any person who cares about justice) would find to be intolerable and a threat to the very foundations of our legal system.  Indeed, that is why DCI has decided to have a non-racist person review your work in hundreds of previous cases.  Any attorney who would be foolish enough to employ you as an expert would quickly find your conclusions called into question due to your racist statements and the circumstances surrounding the termination of your employment by Iowa DCI.  How you hope to testify credibly in court, I cannot understand.

Furthermore, as I am a black person, I am unsure how you could possibly expect to work with me since you would be so busy crossing the street and not feeling safe if you saw me.  While such a fear is without any rational basis, you made the existence of your racist belief clear in your facebook rant, which I and the attorneys and staff at my firm (who are of many different races) found to be disgusting.

Turning back to the substance of your facebook post (and I use the term “substance” loosely as such racist remarks are devoid of true substance), you are factually wrong. Using just myself as an example, I wrote at length about the killing of the Dallas police officers and the killing of a black male by other police officers that led to the protests. That article can be seen on my gun rights website, at https://www.learnaboutguns.com/2016/07/10/the-killing-of-concealed-carry-permit-holder-philando-castile-by-a-mn-police-officer-and-the-killing-of-5-dallas-police-officers/ . In that article, I made clear that the killing of the police officers was wrong – just as every murder is wrong, and discussed my take on the problem of racism at length.  I did so from the perspective of a black male who has dealt with racism in his personal life and his professional life, whose wife is white, and who doesn’t hate anyone based upon race.

Obviously, every reasonable person of every race finds the killing of the Dallas police officers to be wrong.  No reasonable person would try to ascribe any view to millions of people just because of the color of their skin – yet that is exactly what you did in your facebook post. To be sure, I’m sure you can find some idiot online who posted something in support of the murder of the Dallas police officers, just as I can find some idiot online who makes racist posts in favor of murdering black people – and all that tells us is that there are idiots online. If you truly take what people online say at face value, and then attribute that to everyone of the same race, then you are beyond hope.

In sum, you are the embodiment of racism and the sort of person who makes me worry for my children’s future.  The only silver lining in this whole situation is that your decision to make your racist views public made it possible for DCI to detect and remove you from your former position, and then have your work reviewed by a qualified individual whose judgment isn’t clouded by hatred.  If only every other racist would out themselves so that they could be removed from a position where they could do real harm, this world would be a much better place.

Some final Irony
On Ms. Pollpeter’s website, there is a quote at the bottom from Dr. Martin Luther King, Jr.  That quote is “Our lives begin to end the day that we remain silent about things that really matter.”  How it is that Ms. Pollpeter goes on a racist rant, gets fired as a result of that racism, creates a website that uses a quote from one of the most influential black civil rights leaders of all time, and offers services to a black attorney, I cannot begin to fathom.  If Amy Pollpeter’s previous employment by Iowa DCI, her racism, her firing, and the letter/website were not all so clearly authentic, I would believe that this was all a joke.

As I sat here deciding whether to write this post, that quote reminded me that I certainly should post it, as I should not remain silent about someone such as Amy Pollpeter at Forensic DNA Consulting Resources, who poses such a threat to justice and due process.